My name is Jack and I am a gym instructor. It is a tasking job, but sometimes, it just comes in as something I enjoy doing…. Hypnotizing jocks to grow muscles.

I got home early today, namely by 6 pm. Usually, when I have lots of clients, I would stay up till 10 pm. But today, I had to reschedule with a lot of my clients so I can have time with my daughter. Bodybuilding is a time-consuming job, and if care is not taking, we could lose touch of all other essential things in our life. I almost fell for this trap.

I got home and met Caramel on the couch. She was laying there, feeling disappointed. I had no idea what I could do to make her happy since I could not spend the day with her. I reached out to my bag to give her the flower I had brought. She smiled when she first saw it, but her face began to wear off into gloom slowly as she reached out to hold it. It wasn’t still enough.

Caramel was the only person who valued me this much; the last time she felt sad was when her mom died. She had cried all day and refused to eat. She died in a car crash on her way from work. I lost interest in all that I did. I could not even understand why life had to be that difficult. It’s two years ago since it happened, and the effect still feels fresh on us.

When I noticed she did not like the flower, I brought out the dress I got for her; she had told me how she loved red gowns. I got a gown that had strips down its length. I knew she would love it. As soon as she saw the dress, she wore a long-lasting smile. It was something I had longed for in a while. I needed those smile to make me feel loved and help me understand that she is happy.

Soon, my phone rang. It was from Steve. He was Anabelle’s brother, Caramel’s uncle. He would call daily asking after Caramel and speaking with her on the phone. Caramel loved to hear his voice on the phone and just then I thought it was the best time to hear him speak.

“Hello, Caramel is that you? How are you doing?”

There was no response. I guess he must have been used to this new Caramel that hardly said a word except for a few facial expressions. The doctor had said that the accident affected a nerve that would make her speech impaired for a long time.

“I just called the check on you…” Caramel wore a broader smile when she heard that, her eyes meeting mine. It was a good thing he called daily.

“Hello Jack, are you there?”

“Work is cool. I have been trying to relocate. I want to come closer to Caramel. I know it is a long shot, but I think with the best physiotherapy, she would improve much more.”

“How is your Dumb Bodybuilding Centre?” They both laughed when he asked the question. Steve has been indifferent when it comes to weight lifting and muscle training. He would not agree to do anything that will cause him much stress. 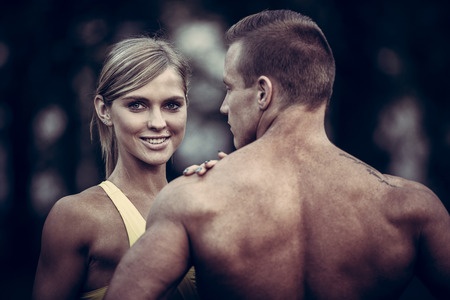 “I know your disposition towards bodybuilding, weightlifting, and hypnosis. You have to give it a try, and you will see that there are health benefits to doing this. It will help you…”

“Hey, Jack. Do not brainwash me into doing this. I am not in for those hypnotized talk of yours…” they both laughed. Jack knows Steve would do well when it comes to working his muscles, and he hasn’t just tried it yet.

“Anyway, first things first, just come around, and we can begin from there.”

When I dropped the call, I noticed Caramel had already begun taking the Ice-cream I had placed on the table. I quickly reached out to my bag and brought out the snack I had bought for her.

I sat with her, and began to eat slowly and share some personal time. I related with his daughter with a speech aid, and sometimes, she writes on a jotter with her pen to say what’s in her mind.

I decided to give her the best surprise ever. I wanted us to see a movie, it began showing in the cinema early this month, and Caramel had reminded me about it.

“Hi baby, I have a surprise for you” I said sitting beside her. She immediately reached out to her jotter to respond to me, and I knew what she wanted to write

I smiled when I saw that. Whenever I needed her to chase me around the house, I would call her baby.

“Okay big baby, I have a surprise for you…” she laughed out louder…

“Caramel… guess what the surprise is.”

“Mommy is not dead?” as soon as she wrote that…my countenance changed, she lay on my bulging biceps and began to move her hands around it. We both loved Anabelle when she was around. Since the accident, it was difficult to believe that she was gone!

“Not that baby, I got two tickets for The Avengers,” I said with much-reduced energy as soon as she heard those words, she screamed and jumped in excitement.

It was then that the doorbell rang. When I opened the door, Steve was standing on my porch and he casually waved at me. “Oh hey Steve, what are you doing here?” Steve smiled at me as we entered the house. “Well you told me to just come around, so since I wasn’t doing anything else today, here I am!”

Caramel heard her uncle’s deep voice and came to the hallway. She was hiding behind the doorpost, shy to interact. Steve waved at Caramel and she took off, running to her room and shutting the door with a slam.

“So Jack… Got plans for the day?” Steve asked while we sat down on the couch. “Actually yes! Caramel and I are going to the movies later, I got us tickets to The Avengers.”

Steve’s smile dampened a little. “What about you, Steve?”

“Not really, I went to the gym but I just wasn’t having a good day, so I called you two and just came over!” I slapped Steve on the shoulder playfully and his smile came back to its full brightness. “Well you know Steve, I can help with the workouts!” Usually Steve would act a little annoyed with the hypnosis suggestion, but today he looked like he was considering it.

“Steve? You okay?” Steve looked at me, stared silently for a bit before slapping his thighs and standing up. “You know what Jack? Fuck it. Let’s do it. Hypnotise me. Make me part of your Dumb Bodybuilder Centre.” This took me by surprise. “What do you mean Steve?” Steve walked towards the home office and beckoned for me follow him.

I sat down in my chair at my desk and he walked in behind me, shutting the door and taking a seat in the comfortable chair. “Jack, I know I’ve made clear that I don’t want to be yet another dumb hypnotised Jock. But I think that if I want to reach my full potential, I need to consider it. So I thought it over and it’s not that bad I guess. As long as you only help me get bigger, no other weird shit okay?”

I had to digest all of this information before agreeing to the proposition. “So let me get this straight. Even though you resisted all this time, you stopped caring now and you’re fine with becoming a Dumb Weightlifting Bodybuilder?” At the mentioning of ‘Dumb’ Steve flinched a little. “Well I was hoping that we could skip that part. But I guess if you deem it completely necessary, I’m okay with trading in a little intelligence for a perfect body.”

I couldn’t really believe it. My brother-in-law who has refused my help for so long has finally caved in. I didn’t want to give him the time to rethink it, so I immediately started to take him down. He visibly relaxed as my suggestions started to tease his ears, slowly softening him up. After a minute of mental barrage, Steve was entranced and drooling.

“Steve, from now on, you work out every day. You’ll also start investing in supplements and it will be the most important thing to you after Caramel and me. All information that is not related to either will be forgotten. You only think about lifting, living and family. You are a dumb Jock.” I made Steve repeat the input and I went to check in on Caramel.

I knocked on the door and walked in. Caramel was sitting on the edge of her bed, reading a book. “Hey Sweetie. Are you getting ready to go to the cinema?” Caramel grabbed her notepad, wrote something and held it up. I laughed. “Uncle Steve is fine. I helped him with a problem he was having! Now get up and put on your shoes, the movie is starting in an hour!”

One thought on “Life with the Dumb Bodybuilding Center”