As I’ve discussed before, I’m a gym instructor. It’s a very rewarding job, and it feels great to take someone and turn them into their best self.

A little while back, I walked into the dressing room after another shift when I saw a teen sitting with his hands in his hair. I asked him what the matter was, and he looked up at me and saw my badge. “Oh sir, I’m so glad to meet you. I’ve been working out here for 6 months now, but I haven’t made any progress! I think it’s actually gotten worse…” He tried to flex a bicep for me, but nothing really happened, so he went back to his breakdown. I saw an opportunity to help better someone’s life. “Okay buddy, I’ll help you. But I need to know if you are willing to do whatever I need you to do. Are you willing to become a bodybuilder jock, doing whatever it takes?”

This peaked the lad’s interest.

“What do you mean Sir? Do you need me to take steroids or something? I’m not against it, but I’ll need to do some research first.”

I laughed. This was promising.

“So here’s what we’ll do.” I handed him a card. “Meet me here in about an hour. We’ll have your first session then and I’ll assess the situation. See you then, I’m gonna work out.”

The boy looked super happy and went into the gym to start his workout.

After the workout I went back to my home office and after some administration work and lounging, the doorbell rang. I opened the door and he excitedly entered the house.

The guy was so eager, that he came straight from the gym. “I can’t wait to start Sir! I completely forgot to introduce myself, haha, I’m Tom. What’s your name?”

I smiled and reached out my hand, which he enthusiastically shook.

“It’s Jackson, but you may call me Jack.” Tom looked around, peeking through the open doors. “So what’s on the schedule? When you said session I thought you had a home gym and everything, but I don’t see any equipment?” I directed him into my office. “Yeah we’ll work out in the gym. I’m a certified hypnotist and trainer. I will put you in a trance to help you work out.” Tom’s excitement drained from his face. “This wasn’t really what I expected, but I guess I can try it?” Tom relaxed in his seat and I sat down in front of him.

It wasn’t hard to take him under. I guess this was because he didn’t really have time to get a clear judgement about hypnosis, but he went out like a light. Tom leaned back, deeply entranced and malleable.

First of all, I needed him to square up. Focus on his gains. Growing big will be his new priority. Tom mumbled “Grow big, focusss…”

“Second of all, forget anything that’s not about bodybuilding and weight lifting. Forget it all and become a dumb jock.” Tom let out a stupid chuckle.

I then took him out of trance and he immediately felt completely different. Not only was he a lot cockier, but he also really became stupid. Maybe I deleted a little too much knowledge since he barely remembered his name when he woke up, but in the end it’s all for a good cause.

“What’s your name, bro?” He asked. I laughed. “Jackson, but you can call me Jack.” Tom’s eyes looked hallow and he chuckled again. “Hehe, Jack sounds like Jock.” I ruffled his hair and sent him home, luckily he had his address stored in his phone or otherwise I might have needed to let him sleep in the garage!

This all happened a few months ago. He got into some hot water at home since he forgot most of his life, so he started hanging out at the gym more. He started growing like I had brainwashed him to do, and as he did with me, people sought him out for help. He started coaching people for some pocket money. His clients loved him because he was completely devoted to working out and he knew almost anything there was to know about it.

The owner of the gym saw his potential and offered Tom the place above him, allowing Tom to live there for free if he became a full time trainer. Tom did the little math he was capable of. “Living closer means more time to work out. I’ll take it.”

The next time I walked into him after our last session, was while I was checking up on another client. Tom barely recognized me, but he was super excited to see me. While we were catching up, he revealed that it was probably the best thing to ever happen to him. We finished up on our respective clients and we decided to head to his apartment, which was pretty decently furnished.

We sat down on his sofa, and after a little small talk I said “Dumb Jock”, to which he responded by closing his eyes and falling under my grasp. “Tom, have you ever had a client that you couldn’t really help?” Tom looked a little sad. “Yeah bro. Sometimes I just don’t know how to help dudes if they’re too different from me. That sucks cause like I want to help them bro.” I patted him on the shoulder. “Whenever there’s a client you can’t help; you’ll send them to me. I’ll turn them into a Dumb Weightlifting Hypno-Jock like you in no time.” This made Tom happy, and he smiled brightly. He flexed his muscles a little while he received a few last tweaks to his psyche, and when he woke up he hugged me tightly. It was only then that I realized that he almost rivaled me in size!

I left him with a few more cards to hand out and he went back to his job, apologizing to the waiting client for the long lunch break. I drove home and did some administration when my phone started buzzing, letting me know there was a new message. I unlocked the phone, opened the app and saw that the new message was from Tom. “Hey Jack, Thanks again for all your help. I don’t know why, but I really feel like showing off my muscles for you, so here’s a pic with them haha!” I looked at the picture and smiled, feeling happy that I had helped yet another person unleash their full potential as a Dumb Bodybuilding Jock.

*Names have been changed to protect identity 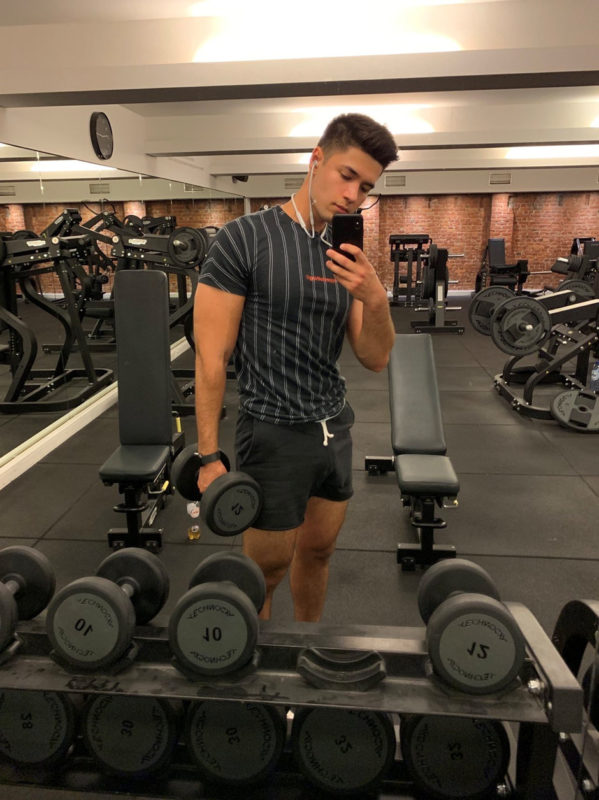 7 thoughts on “Making A Bodybuilding Jock”