A novel way to approach bodybuilding

By far the most popular category on Transform Hypnosis is in muscle and fitness. It’s best to work with my strengths and make what the most people want… and the people want bodybuilding hypnosis. Well they want that from me, in any case.

I’ve halted a lot of my work so that I could make the best muscle-building hypnosis program. There’s a good bit of bodybuilding hypnosis available out there on the web, but I wanted to make the best possible program on Earth. The best I can do, or better. After seeing the joy, appreciation, and all the life changing experiences shared because of this work, I really wanted to make something incredible for the enthusiasts.

And let’s be honest–I have become quite good at this niche after fulfilling so many requests for it (always room to improve though). Here’s the most important part, though–everyone wants something different. Often something very different. They want things that I could never predict. They often want things that are simply individual to them. For them, I am glad to have the opportunity of making a custom audio for their needs. There is definitely no better option when it comes to getting exactly what you need or desire. Everyone has their own personal flavor. Honestly, that is amazing! It’s endlessly pleasing to see that people are such individuals, going after their own specific desires. Reaching for what you want specifically is paramount.

Anyway, it was an absolutely fantastic idea to make a survey and send it out to as many subjects as possible who are into this niche. The data have proven INVALUABLE when it comes to making the best work possible. I couldn’t make something this great without you.

My predictions about your hypnotic bodybuilding needs were definitely wrong

I am thankful that they were wrong, too. Some people also made predictions, guessing how it would turn out. They were mostly wrong, too. How fallible our guesses are! It’s crucial to step back from ourselves and remember that we don’t know shit. If I didn’t do this survey, I would definitely be making an inferior product. Pretty unacceptable!

There IS one way to get it right, though–with cold, hard data.

So I collected data. I asked you what would be best, and decided majority would rule. Makes me glad I did that stats course in university. Whoa, did I actually learn something useful in university?

An incredibly high percentage of people filled out the survey I emailed them (73 out of ~120), which is really high in the email world. This shows that I’m doing something right, because people actually like getting emails from me, and helping me out. I also prefer to keep my list tight, going for quality over quantity. That’s my style, but feel free to copy that yourself! 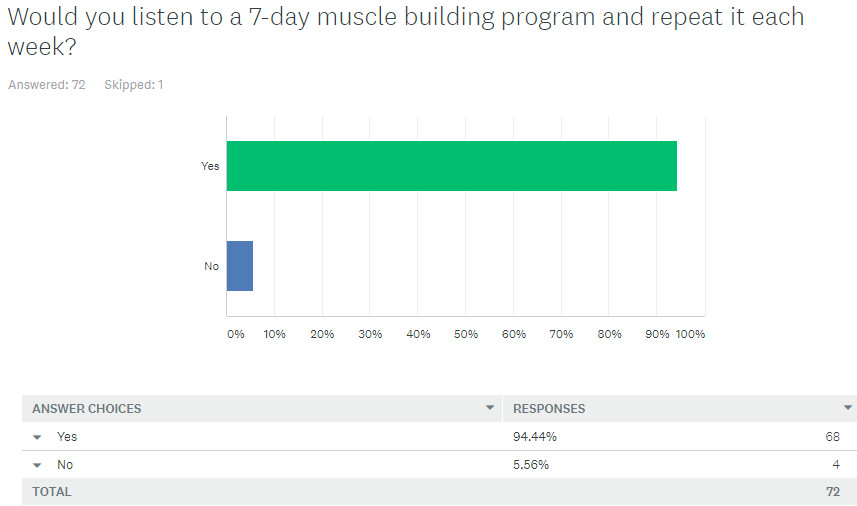 I was a little surprised to see how much interest there was in this. Right off the bat, we are off to a great start. 94% of users want to follow a 7-day program listening program. I wonder how many would actually follow it consistently. I plan to take care of that issue with some assertive emailing, though.

This was one of the biggest surprises. This gives us a really good idea of which particular file people want the most. I asked this primarily so that I would know which one to offer for free as a sample. I want people to see what they’re going to get before they buy. Transparency is good–I want people to see for themselves that it’s good stuff. If I am making an amazing product, I have nothing to hide. Honesty, quality, and no bull… people really appreciate that, especially in a world full of internet fakers and scammers.

I really thought most people would go for Arm Building, but the interest in Ab/core building almost doubled everything else. I thought that would be at the bottom!

I’m also surprised to see Recovery is very popular. I am definitely including that one (though some users may have just chosen it because they couldn’t decide). 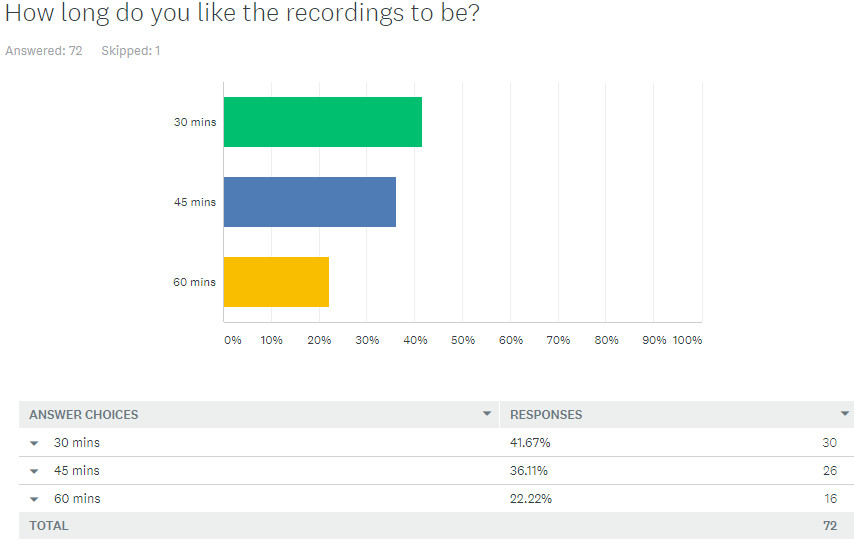 I was wrong here again. I thought most people would want a longer recording, but as it turns out, apparently you have shit to do. Busy life, I get it.

Thanks to these results, I’m aiming for recordings at 35 minutes. I’m also going to include an optional induction file made specifically for this program, that you can put into a playlist and listen to before the main file. If you don’t have time, you can have a short trance. If you have more time, you can have a long trance. 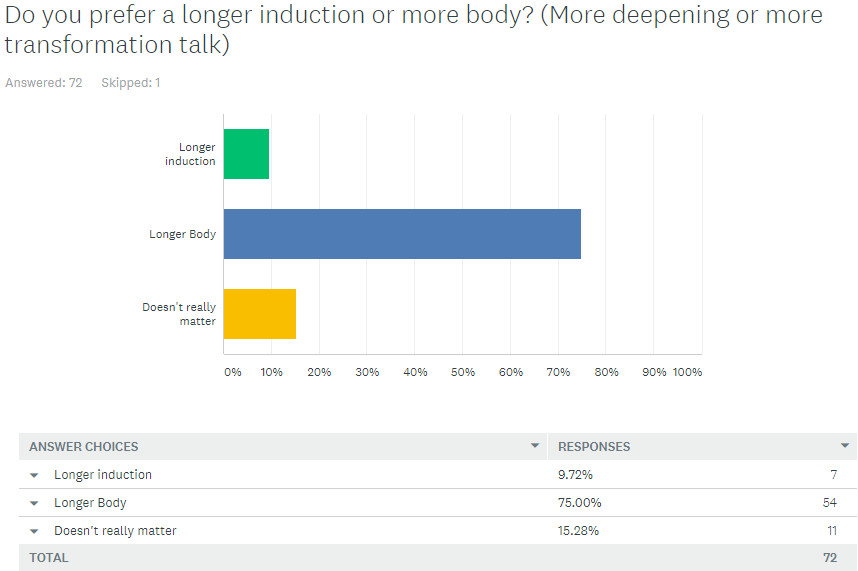 The overwhelming majority want to get to the point quickly. That’s good, because that’s my style. I’ll be doing a quick induction–just about 5 minutes. If you like it longer, there will be an induction file to go with it. The overwhelming majority want a background layer, an almost subliminal voice, and they want it to be my voice. Simple enough. 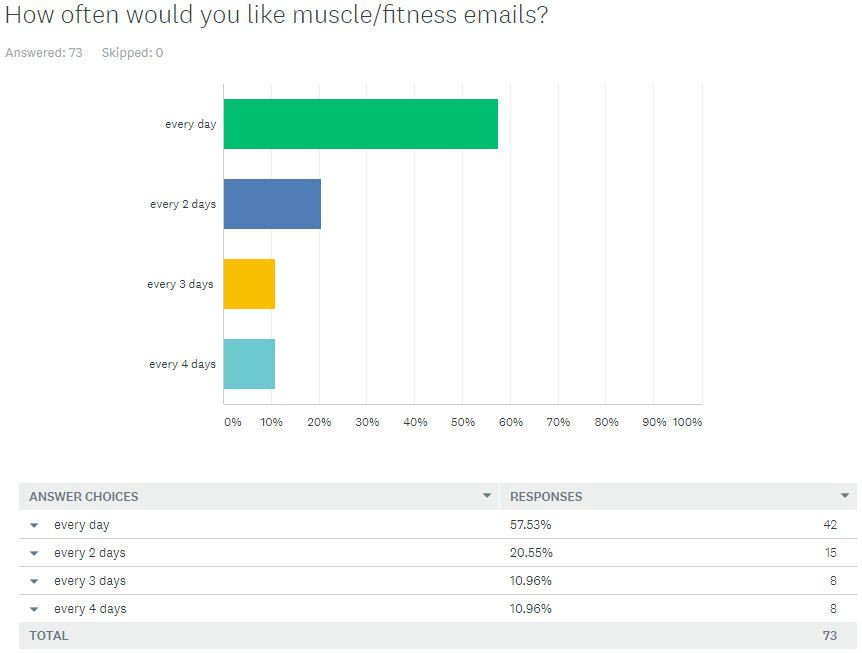 More than half of users want an email to go with it every single day (shameless bragging for how much people want my emails, you can’t say that about most email sign-ups you get today). This is actually a pretty tall order though, as it takes a lot of work to get that many emails out. I would like to offer muscle-based trance emails for 4 days a week. Probably mon-tue-thur-fri. 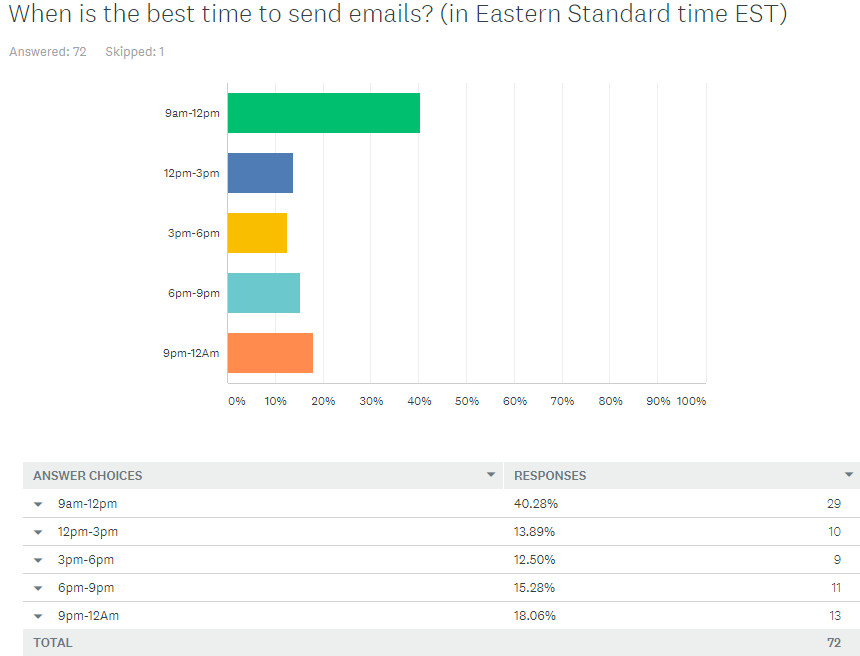 Send it first thing in the morning. Got it. 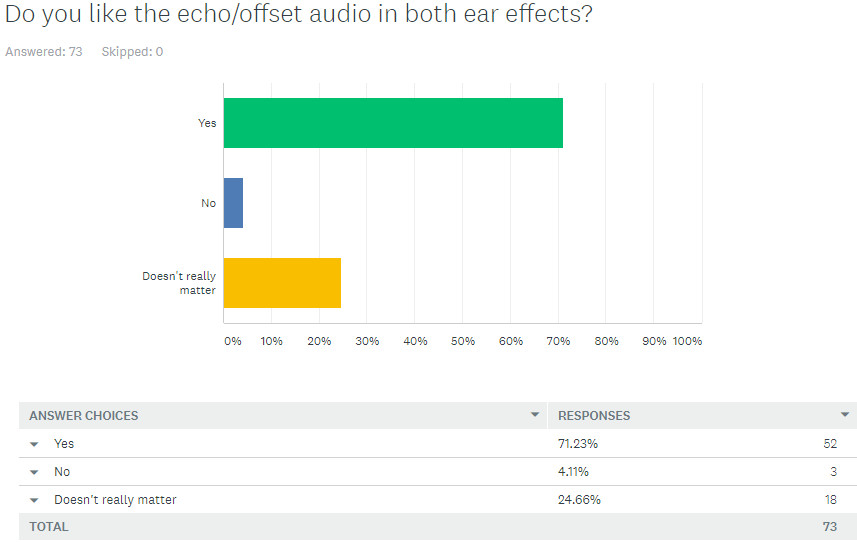 I was wondering if the echo effect made it too difficult to understand, but apparently not.

I also asked what your favorite part was, and what else you’d like to see in the recordings.

Most people had very individual desires, which are more suited to custom audios. Overall, most were pretty happy just to receive something great. A large portion voiced that they really like the loss of control or mind-body domination aspect of it. Everyone liked the real positivity of the experience.

There’s no better way to get the best results and make the best product than asking your clients exactly what they want, then testing it and making improvements to the product.

I also learned a lot of great tips from Jason Linett’s podcast Work Smart Hypnosis. He really knows his stuff, and loves getting into the little details to make everything that much more effective.

Here’s what the survey allowed me to decide about the recordings:

-This is a great idea, and it is very much wanted.
-I should offer Ab/Core building if I’m going to offer one for free.
-Make the recordings approximately 35 minutes.
-Use a short induction
-Use a background layer with my own voice
-Send as many emails as possible.
-Send emails in the morning.
-Use echo effects

Some more notes on this

These results are not the defining answer on the desires of all users in this niche. They are the desires of my particular subscriber base at the current moment of the survey. With more answers and more subscribers, these answers may shift. However it does provide a good estimation, and certainly a much better estimation than any one person could provide.

If you took part in this survey, then I’m really thankful for your help. I’m also thankful for your patience, as I have been promising this work for a long time, and no one has pushed me to release this quickly. I have been given lots of space to obsess, mull over it, and do lots of testing so that this is the greatest work possible.

Thanks for being so patient. In the meantime, you can go grab another Muscle file that’s available already and listen to that.